In line with the “Europe 2020 Strategy”, while all regions contribute to the general goal by investing in jobs and growth, the methods and scope of the intervention differ according to the level of economic development of each of them, settling down three categories for such purpose. Based on this premise, regions are divided for this purpose into three different categories:

Within this framework, the budget established in the Community cohesion policy is distributed as follows: 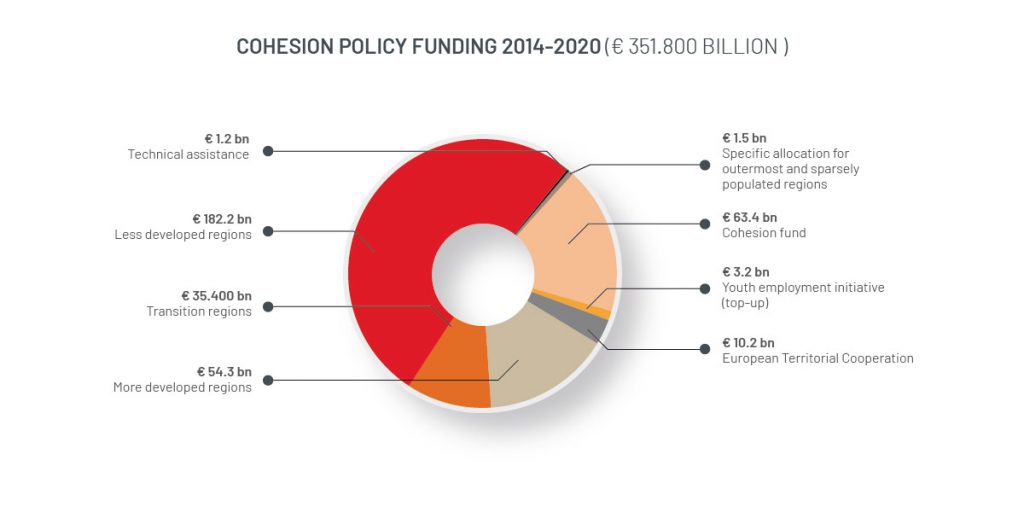 By country, the budget for the 2014-2020 period is distributed as follows: 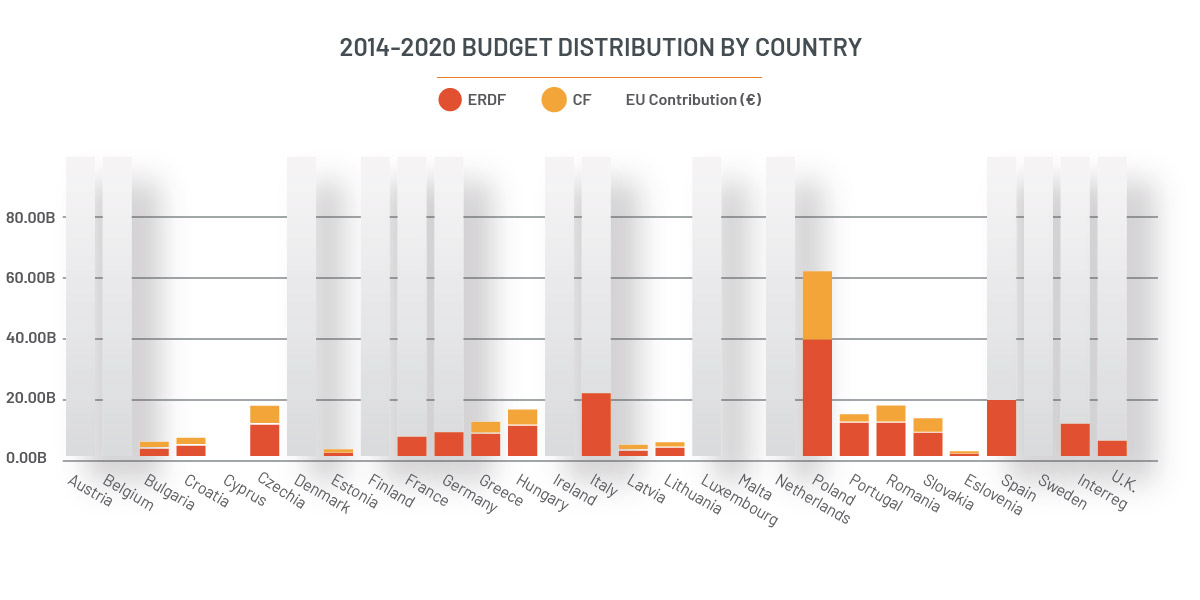 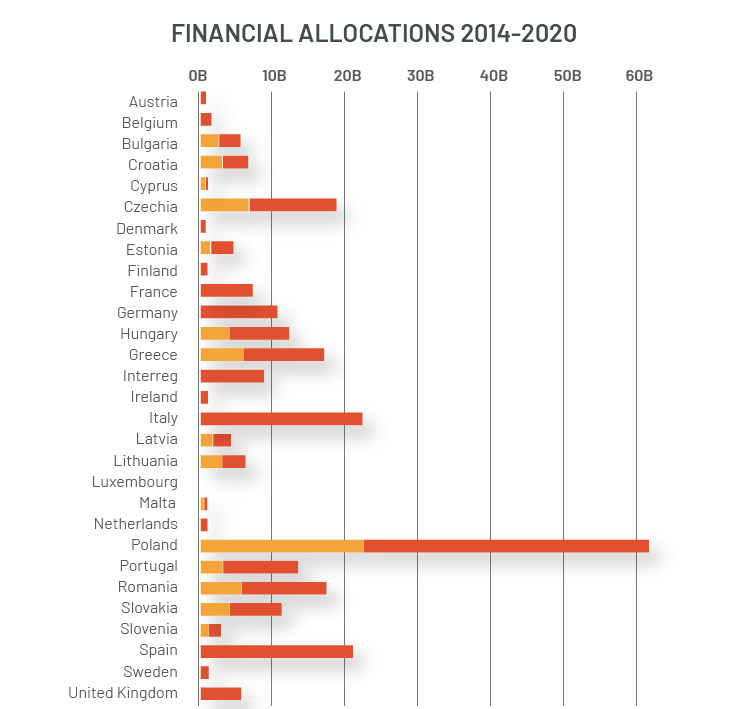 For the new 2021-2027 period, the Union’s regional and cohesion policy will focus on five priorities:

Regional development investments will strongly focus on objectives 1 and 2, while 65% to 85% of ERDF and Cohesion Fund resources will be allocated to the foregoing five priorities, depending on Member States’ relative wealth.

The Cohesion Policy will keep on investing in all regions, still on the basis of the 3 categories applied during the 2014-2020 period (less-developed, transition, more-developed). Similarly, the allocation method for the funds is still largely based on GDP per capita, although new criteria are added, such as youth unemployment, low education level, climate change, and the reception and integration of migrants, to better reflect the reality on the ground. Outermost regions are also expected to continue benefitting from special EU support13.

Lastly, according to available information, the Cohesion Policy will continue to support locally-led development strategies, encouraging local authorities to play a more prominent role in the management of funds. In the same way, the urban dimension of the Cohesion Policy is strengthened with 6% of the ERDF dedicated to sustainable urban development.

Along the same lines, it includes a new networking and capacity-building program for urban authorities known as the “European Urban Initiative”.

Regulation (EU) No 1303/201314 of 17 December lays down common provisions applicable to all of the European Structural and Investment Funds (ERDF, ESF, Cohesion Fund, EAFRD and EMFF) and general provisions applicable to some of them, in order to ensure the effectiveness of the ESI Funds and their coordination with one another and with other EU instruments, notwithstanding the specific rules regulating each Fund and which are set out below.

The purpose of this Regulation is to improve the coordination and harmonize the execution of the Structural Investment Funds (ESI Funds) to ensure “smart, sustainable and inclusive growth” focused on the attainment of eleven thematic objectives:

To this end, a Common Strategic Framework (CSF) is created (which can be reviewed by the Commission where there are major changes in the social and economic situation in the Union), setting a number of common recommendations and criteria for those opting for financing from the ESI Funds.

Based on the foregoing premises, the aim of the Funds is to supplement the financing provided through national, regional and local interventions, in order to deliver the “Europe 2020 Strategy”, as well as the objectives specific to each Fund. The Member States, in accordance with their institutional, legal and financial framework, and the bodies designated by them, shall prepare and implement programs and carry out their tasks, in partnership with the relevant partners. To this end, each Member State must promote a partnership in which, in addition to the competent local and regional authorities, with the participation of the following partners:

With this premise, the Partnership Agreement is the national document prepared by each Member State for the period between January 1, 2014 and December 31, 2020, which explains the investment strategy and priorities of the respective Funds (ERDF, ESF, EAFRD and EMFF) in such State and must be approved by the Commission. Such strategy must be based on a previous analysis of the current situation of the Member State and its regions, in particular (i) the disparities existing between those regions; (ii) the opportunities for growth and (iii) the weaknesses of all its regions and territories, focusing on the “thematic objectives”, which will entail the identification of the actions in the State in question which are to be treated as priorities by each of the ESI Funds.

In the case of Spain, the Partnership Agreement for the period 2014-2020 was approved by the European Commission on November 4, 2014. It establishes as specific objectives of the ESI Funds, in Spain, to promote the competitiveness and the convergence of all territories, giving priority: (i) to the thematic areas included in the recommendations given by the European Council; (ii) to those contained in the Position Paper prepared by the Commission15; as well as (iii) to those set forth in the National Reform Program approved by the Council of Ministers on April 30, 2014.

The Partnership Agreement envisages an investment of 28,580 million euros aimed at financing the entire Community cohesion policy in this country for the period 2014-202016, a figure which must be increased by 8,290 million euros to be used for the performance of Rural Development Programmes and 160 million euros intended for the fisheries and maritime sectors.

This financing is to be used to execute the proposals for action described in the Partnership Agreement in connection with each of the thematic objectives listed above, their main priorities being the following:

The material implementation of the Funds, however, requires the approval of the corresponding Operational Programs (i) prepared by each Member State in accordance with the terms of the Partnership Agreement and (ii) presented to the Commission for its approval. Each Program will define priorities and proposals for action, specifying the projected investment and breaking it down by each of the years of the period in which it is applied. In the case of Spain, almost all of the Operational Programs were fully operational following their approval by the European Commission and are no in their last year of implementation17.

8.3.3 Funds under the Cohesion Policy: ERDF, ESF and Cohesion Fund

The Funds under the Cohesion Policy include Structural Funds (ERDF and ESF) and the Cohesion Fund, which contribute to enhancing economic, societal and territorial cohesion. The Community cohesion policy pursues two objectives:

14This Regulation was recently amended by Regulation 2020/460 of the European Parliament and of the Council of 30 March 2020, with a view to establishing specific measures to address the “exceptional situation” resulting from the “consequences of the COVID-19 outbreak” (Recital One). In general, these are amendments aimed at providing more flexibility to Member States for compliance with certain conditions or requirements regarding the use of the funds to attend to needs resulting from the pandemic.

In turn, the Commission also approved Regulation (EU) 2020/558 of the European Parliament and of the Council of 23 April 2020 amending Regulations (EU) No 1301/2013 and (EU) No 1303/2013 as regards specific measures to provide exceptional flexibility for the use of European Structural and Investment Funds in response to the COVID-19 outbreak (OJEU of April 24 2020).

In particular, Member States are given the exceptional possibility of requesting the application, for programs included in the Cohesion Policy, of a co-financing rate of 100% of the expenditure declared in payment applications during the accounting year starting 1 July 2020 and ending 30 June 2021 for one or more priority axes in a program supported by the European Regional Development Fund (ERDF), the European Social Fund (ESF) or the Cohesion Fund (CF).

Please also note that resources available for programming for the year 2020 for the investment for growth and jobs goal may, at the request of a Member State, be transferred between the ERDF, the ESF and the Cohesion Fund (although they cannot affect resources allocated to the Youth Employment Initiative or to the aid for the most deprived under the investment for growth and jobs goal).

Lastly, the resources available for programming for the year 2020 may, at the request of a Member State, be transferred between categories of regions in response to the COVID-19 outbreak.

15Report on the Position of the Commission Services on the development of a Partnership Agreement and Programmes in SPAIN for the period 2014-2020. October 2012.

16Including the financing of European territorial cooperation and the allocation for the youth employment initiative.

We use cookies on our website to give you the most relevant experience by remembering your preferences and repeat visits. By clicking “Accept All”, you consent to the use of ALL the cookies. However, you may visit "Cookie Settings" to provide a controlled consent.
Cookie SettingsAccept All
Manage consent

This website uses cookies to improve your experience while you navigate through the website. Out of these, the cookies that are categorized as necessary are stored on your browser as they are essential for the working of basic functionalities of the website. We also use third-party cookies that help us analyze and understand how you use this website. These cookies will be stored in your browser only with your consent. You also have the option to opt-out of these cookies. But opting out of some of these cookies may affect your browsing experience.
Functional
Functional cookies help to perform certain functionalities like sharing the content of the website on social media platforms, collect feedbacks, and other third-party features.
Performance
Performance cookies are used to understand and analyze the key performance indexes of the website which helps in delivering a better user experience for the visitors.
Analytics
Analytical cookies are used to understand how visitors interact with the website. These cookies help provide information on metrics the number of visitors, bounce rate, traffic source, etc.
Advertisement
Advertisement cookies are used to provide visitors with relevant ads and marketing campaigns. These cookies track visitors across websites and collect information to provide customized ads.
Others
Other uncategorized cookies are those that are being analyzed and have not been classified into a category as yet.
Necessary
Necessary cookies are absolutely essential for the website to function properly. These cookies ensure basic functionalities and security features of the website, anonymously.
SAVE & ACCEPT
Powered by