4. Incentives for investments in certain regions

4.1 Granted by the State

Regional incentives are financial subsidies granted by the Spanish State to productive investment projects carried out in previously-determined regions of Spain to promote the pursuit of business activity in those areas. The aim is to help alleviate existing territorial imbalances and to reinforce the endogenous potential for development of regions with a lower level of growth. The State administration grants such aid in accordance with the demarcation of eligible areas and maximum aid intensities stipulated by the European Commission for regional aid. The functions relating to regional incentives are attributed to the Directorate-General of European Funds, under the Secretariat of State of Budgets and Expenses of the Ministry of Finance.

As indicated, these incentives consist of financial aid to be used to finance investment projects that create jobs, to be executed in areas with the lowest level of development, or in those whose special circumstances so recommend, provided that they entail (i) the startup of a new industrial establishment; (ii) its expansion or (iii) the modernization of an existing industrial establishment.

Although the general regulations for this type of aid are found in Law 50/1985, of December 27, 1985, on regional incentives for the correction of territorial imbalances, and in its implementing Regulations approved by Royal Decree 899/2007, of July 6, 2007, the geographic demarcation of the eligible areas and the specific definition of the maximum financing limits, as well as of the specific industry requirements regarding economic sectors, eligible investments and conditions, are regulated in the respective Royal Decrees demarcating each one of the economic development areas.

Unavoidably, the Royal Decrees demarcating economic development areas have had to be brought into line with the “Guidelines on regional State aid for 2014-2020” published on July 23, 2013 in the Official Journal of the European Union, as well as with the “Regional Aid Map for Spain (2014-2020)” approved by the European Commission on May 21, 2014.

Indeed, suffice it to recall that within the framework of the Guidelines, the European Commission approves an aid map for each Member State, stipulating the maximum limit of financial aid or subsidies that can be received by investment projects in each region under “regional incentives” during the reference period.

In the context of the mid-term review envisaged in the Guidelines for the year 2016, the Commission published Communication 2016/C 231/01 asking the States to present their proposals for the amendment of their respective regional maps. This was done in the case of Spain on July 28, 2016, when the amendment to the Spanish regional aid map for the period between January 1, 2017 and December 31, 2020 was approved by the Commission in a Decision dated November 7, 2016.

In particular, according to the amended aid map for the Kingdom of Spain, the Spanish region for which the greatest incentives are envisaged continues to be the Autonomous Community of the Canary Islands, with a maximum aid intensity percentage per investment project of up to 35% of the net eligible investment.

The Autonomous communities of Castilla-La Mancha, Extremadura, Andalucía, the Murcia Region, and the Autonomous City of Melilla are other Spanish regions eligible for regional incentives with a maximum aid percentage of up to 25%, since their GDPs were found to have fallen to below 75% of the average for the European Union over the period examined.

Similarly, the provinces of Soria and Teruel continue to feature prominently, with the grant of aid to these regions of up to a maximum intensity of 15% of the net eligible investment being permitted throughout the entire period and, accordingly, through December 31, 2020. 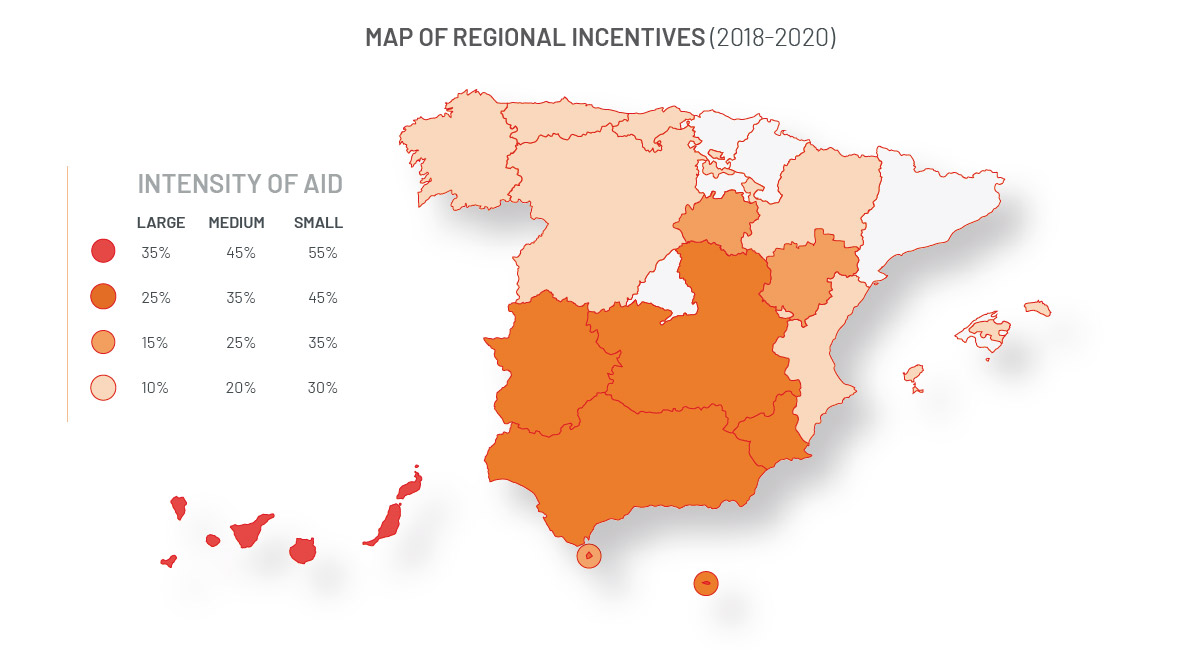 In any case, during this period the Autonomous Community of Madrid, the Basque Country, Navarra and Cataluña, as well as the municipality of the provincial capital of Valencia, the municipality of Zaragoza and certain municipalities of the Autonomous Community of La Rioja and of the Islands of Mallorca continue to be regarded as regions ineligible for subsidies, pursuant to the state legislation on regional incentives and the Royal Decrees demarcating economic development areas.

As stated, the aforementioned amendments to the regional aid map were incorporated into Spanish legislation through the appropriate amendments to the respective Royal Decrees of demarcation of each of the economic development areas, approved on December 30, 2016.

The Royal Decrees stipulate the maximum intensity of permitted aid (calculated as a percentage of the eligible investment), distinguishing among beneficiaries, according to whether they are large, medium-size and small enterprises, as shown on the following table:

Having regard to the foregoing, the following is an explanation of the main characteristics of the regional incentives analyzed:

These are stipulated in each Royal Decree demarcating the respective geographical area. The main eligible sectors, however, are, in general, as follows:

The types of investment eligible for incentives are new or first-time use fixed assets, referring to the following investment items:

The possibility of including lands as an eligible fixed asset were eliminated by the Regulations implementing the Regional Incentives Law when the regional financing Guidelines for the previous period (2007-2013) came into force.

The regional incentives available for grant consist of:

In the cases under letters b), c) and d) above, there is also a possibility of regional incentives being converted into a percentage of the subsidy on the approved investment.

The form of incentive most commonly granted, however, is the non-returnable subsidy.

Projects must be evaluated using the methods stipulated in each Royal Decree of demarcation, which will also determine the percentage of subsidy to be granted for each project. Notwithstanding the specific provisions of each Royal Decree, the main parameters to date considered by the relevant bodies are as follows:

No investment project can receive other financial aid if the amount of the aid granted exceeds the maximum limits on aid which have been stipulated for each approved investment in the Royal Decrees of demarcation of eligible areas.

Therefore, the subsidy received is compatible with other aid, provided that the sum of all the aid obtained does not exceed the limit established by the Royal Decree of demarcation and EU rules do not preclude it (incompatibilities between Structural Funds).

4.1.8 Execution of the project and alterations subsequent to grant

Investments may be initiated without having to wait for the final decision to be adopted, provided that applicants have suitably proven, as stipulated above, that such investments had not been initiated before the application was filed. This possibility does not, however, prejudge the decision finally adopted.

In general, subsequent incidents in the project (i.e., alteration of the initial project, change in the locating of the project, etc.) will be resolved by the Directorate-General of European Funds. Nonetheless, if the alteration of the project entails changes in the activity or a variation in the amount of the incentives granted, the amount of the investment approved or the jobs to be created, in excess of the limits set in article 31.1 of the Regulations of the Incentives Law, they will have to be resolved by the same body that granted the aid.

Applications for alteration of the projects must be submitted to the relevant Autonomous Community agency and addressed to the Ministry of Finance, and must specify the conditions which have been altered since the filing of the initial application.

The deadline for deciding on applications and serving notice thereof will be six months following their receipt by the Directorate-General of European Funds. As a general rule, if the administration fails to respond, this can be construed as an affirmative decision. However, when the alteration entails a change in activity, variation in the incentives, in the amount of the incentive approved, or in the job positions to be created, and it exceeds the thresholds established in the aforementioned article 31.1 of the Regulations for the Incentives Law, the absence of a response within the stipulated time must be construed as a rejection of the alteration application.

Following issue of a report confirming the degree of compliance with the requirements imposed by the relevant agency on the project in question, the beneficiary must file a request for payment of the subsidy (on a standardized form) together with the other required documentation (evidence of performance of tax obligations and obligations to social security, etc.) with the relevant Autonomous Community agency from which it will be referred to the Directorate-General of European Funds.

Subsidies may be paid using the following methods:

For more information, please consult the website of the Ministry of Finance (https://www.dgfc.sepg.hacienda.gob.es/sitios/dgfc/es-ES/ipr/Paginas/inicio.aspx).