The European Investment Bank (EIB) grants funding with a threefold objective: to boost Europe’s potential for growth and employment, to support measures aimed at mitigating climate change, and to foster EU policies in other countries.

On these bases, the EIB funds projects that promote the development of less favored regions and those of common interest to several Member States or benefiting the EU as a whole. They are focused mainly on the following four areas: (i) innovation; (ii) small businesses; (iii) infrastructures, and (iv) climate and the environment.

Additional to the foregoing are projects aiming at promoting and modernizing infrastructure in the health and education sectors may also qualify for EIB support.

The EIB is jointly owned by the EU countries and borrows money on the capital markets. For this reason, the loans it grants for projects that support EU objectives are not considered funded with money coming from the Union budget.

According to information published by the EIB, the total amount of funding contributed by the EIB group in 2019 was €72.2 billion (€63.25 billion from the EIB and €10.23 billion  from the European Investment Fund).5

Specifically, the €72.2 billion were allocated to the following objectives:

It is to be noted, in particular, that financing from the EIB in Spain during 2019 amounted to €8.966 billion, making it the country which received the second largest amount of funding from the EIB Group6. 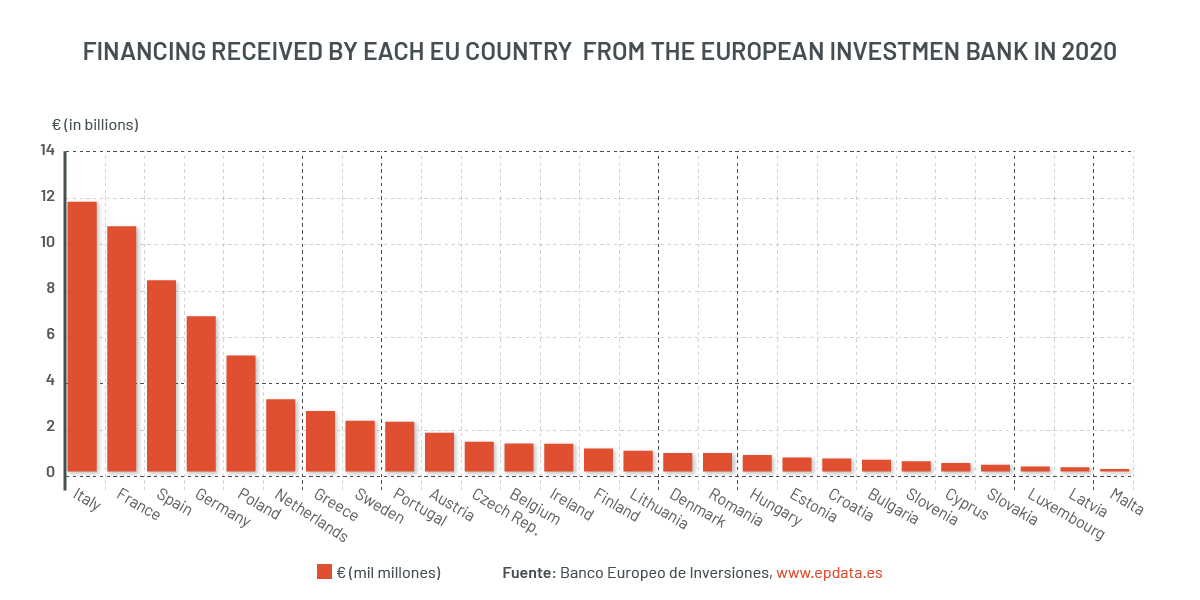 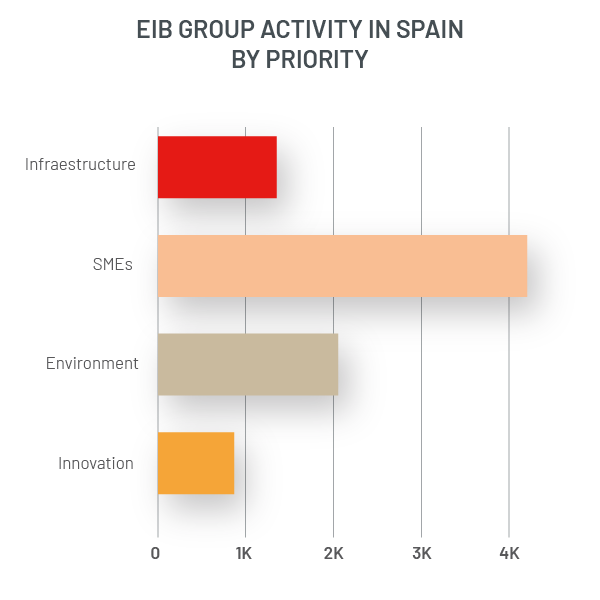 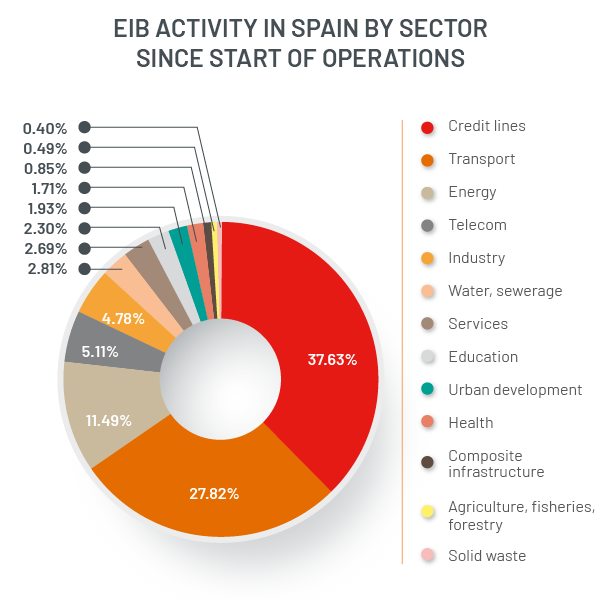 On these bases, the EIB has been offering two types of loans:

Global loans are similar to the credit lines granted to financial institutions, which subsequently lend the funds to the final beneficiaries, so that they can make small or medium-scale investments meeting the criteria set by the EIB itself.

This is the main instrument with which the EIB provides support for SMEs and MID-CAPs since, by granting loans to banks or other intermediaries, access to funding is provided indirectly to small and medium-scale business initiatives (although there is no reason why loans of this type should not ultimately benefit large companies, local and national authorities and other public sector entities).

The loans are granted by the EIB to banks or other financial institutions in all the Member States, which act as intermediaries. These financial intermediaries conduct an analysis of the investment, and of the economic, technical and financial viability of each of the projects. They are responsible for granting the loans for small and medium-scale investments and for the administration of such loans.

There are many different types of loans and credits, with varying maturities, amounts and interest rates, but their general terms can be summarized as follows:

Applications must be filed with financial institutions or other intermediaries.

The EIB also grants loans for individual projects with a total investment cost above €25 million.

Although the loans can cover up to 50% of the total cost, on average, they tend to cover approximately only a third.

In general, the following are the main characteristics of these loans:

Lastly, an essential role is being played by the EIB in starting up the European Fund for Strategic Investments (EFSI).

The EFSI was created by the European Commission to help meet the objective of mobilizing at least €315 billion in new investments during the 2015-2017 period. Nevertheless, in September 2016, the European Council began to work on a new proposal aimed at extending the EFSI, so as to increase its funding, and bringing the total investment to €500 billion. In fact, Given the success of the EFSI, President Juncker, in his 2016 State of the Union speech, presented a proposal to extend its term and its capacity as an additional boost to investment through the so-called “EFSI 2.0”. Regulations (EU) 2017/2392 and (EU) 2015/1017 were approved for such purpose, referring to the extension of the term of the European Fund For Strategic Investments and the introduction of better techniques for this Fund and for the European Investment Advisory Hub, with an investment goal of €500,000 million and an extension of the initial period (2015-2017) for a further three years, i.e., through 2020.

The objectives pursued with this extension and enhancement of the EFSI were: (i) to offer greater transparency; (ii) to use most of the financing for sustainable projects; (iii) to pay greater attention to small projects; (iv) to improve technical support at local level; and (v) to enhance the business environment of the European Union.

In order to meet the objectives pursued with the extension and enhancement of the EFSI, the Commission promoted the creation of the figure of the national development bank so that, together with the European Investment Bank and private investors, such banks make an effort, based on their supplementary nature, which makes it possible to reach the objective of the European Investment Plan. In this connection, Spain made available to the ICO, as the as the Spanish national development bank, €1.5 billion for projects that receive financing from the EFSI7.

In Spain the total funding from the European Fund for Strategic Investments (EFSI) amounts to €10.4 billion  and is expected to generate additional investments for an amount of €51.1 billion8.

More than 111 infrastructure and innovation projects have been approved, funded by the European Investment Bank with the backing of the EFSI.

In connection with small and medium-sized enterprises, 31 agreements have been executed with intermediary banks, funded by the EIF with the backing of the EFSI.

In this context and with a view to preparing the new Community budgetary framework (2021-2017), the Commission is proposing to build on the success of the EFSI model and benefitting from economies of scale by merging all instruments currently available to foster investment in the EU.

In fact, in June 2018 it proposed creating the “InvestEU” programme to bring EU budget financing in the form of loans and guarantees under one roof.9

According to the proposal, the EU budget would provide a €38 billion guarantee to support strategically important projects across the EU. By crowding in public and private investments, the Commission expects the “InvestEU” Fund to trigger more than €650 billion in additional investment across the EU between 2021 and 2027.

Lastly, in order to confront the serious economic consequences caused for EU Member States by the paralysis of activity due to the COVIC-19 public health crisis, the EIB Group (made up of the EIB and the European Investment Fund –or EIF, to which we refer below-) has established a €25 billion guarantee fund to deploy new investments with which to respond rapidly to this situation.10

We use cookies on our website to give you the most relevant experience by remembering your preferences and repeat visits. By clicking “Accept All”, you consent to the use of ALL the cookies. However, you may visit "Cookie Settings" to provide a controlled consent.
Cookie SettingsAccept All
Manage consent

This website uses cookies to improve your experience while you navigate through the website. Out of these, the cookies that are categorized as necessary are stored on your browser as they are essential for the working of basic functionalities of the website. We also use third-party cookies that help us analyze and understand how you use this website. These cookies will be stored in your browser only with your consent. You also have the option to opt-out of these cookies. But opting out of some of these cookies may affect your browsing experience.
Functional
Functional cookies help to perform certain functionalities like sharing the content of the website on social media platforms, collect feedbacks, and other third-party features.
Performance
Performance cookies are used to understand and analyze the key performance indexes of the website which helps in delivering a better user experience for the visitors.
Analytics
Analytical cookies are used to understand how visitors interact with the website. These cookies help provide information on metrics the number of visitors, bounce rate, traffic source, etc.
Advertisement
Advertisement cookies are used to provide visitors with relevant ads and marketing campaigns. These cookies track visitors across websites and collect information to provide customized ads.
Others
Other uncategorized cookies are those that are being analyzed and have not been classified into a category as yet.
Necessary
Necessary cookies are absolutely essential for the website to function properly. These cookies ensure basic functionalities and security features of the website, anonymously.
SAVE & ACCEPT
Powered by