2. The country, its people and quality of life

The population of Spain in 2020 was over 47 million people, with a population density of almost 94 inhabitants per square kilometer.

Spain is a markedly urban society (see Table 1), as evidenced by the fact that 32% of the population lives in provincial capitals.

THE BIGGEST CITIES IN SPAIN*

* Figures refer only to the municipal districts of each city.

Spanish is the official language of the country. There are other Spanish languages that are also official in the corresponding Autonomous Communities (regions), according to their “Statutes of Autonomy”. Education is compulsory until the age of 16 and English is the main foreign language studied at school.

Spain has a labor force of more than 23 million people according to the Labor Force Survey (released in the fourth quarter of 2020). Spain’s population is relatively young: almost 16% is under 16 years old, 65% is between 16 and 64 years old, and only 19% is 65 and over, according to 2020 figures. As highlighted in Table 2, Spain has a highly diverse multicultural and multiracial population.

FOREIGNERS RESIDENT IN SPAIN BY CONTINENT OF ORIGIN
Source: Ministry of Inclusion, Social Security and Migrations3. *Data as of June 30, 2020.

Spain is particularly noted for the contribution from, and the integration of, these groups, as well as for the absence of cultural conflict.

The labor force is highly qualified and capable of adapting to technological changes.

Lastly, in keeping with the commitment entered into with the European Union to promote job creation, the Spanish government has implemented significant reforms to the job market in recent years, introducing a greater degree of flexibility in employment.

Like our neighboring countries, and as a result of the global economic crisis of past years and the changing economy, which has moved away from labor-intensive sectors towards highly technological sectors, the unemployment rate in Spain increased. In order to definitively overcome the consequences of such crisis, Spain launched an ambitious program of structural reform with a view to boosting economic growth and creating jobs.

The Spanish Government, in keeping with the commitments entered into by the European Union to promote employment, implemented major labor market reforms in line with the trends observed in neighboring countries and the proposals made by various economic agents and institutions and international economic advisers. The reforms aimed to introduce greater flexibility, reduced the dual nature of the job market and improved the employability of workers. This, among other factors, has led to the creation of 2.3 million jobs since 2014, although this positive evolution has been interrupted due to the negative impact of the COVID-19 public health crisis.

A number of procedures have also been introduced to facilitate the entry, residence and permanence in Spain, for reasons of general interest, of foreigners who plan to invest and create jobs in Spain or who are highly qualified professionals. 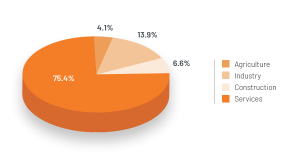